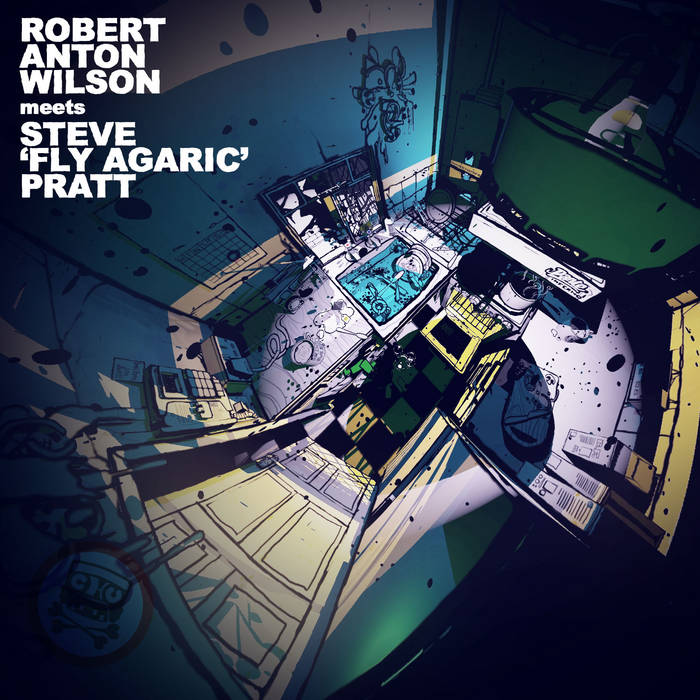 FlyQuark / The Fuck You Sound

While getting firmly hooked on the series of Cosmic Trigger books during the mid 1990s, I literally dreamed of meeting the mysterious author, Dr Robert Anton Wilson. He was an early anarchist hero to me, a truly free man, and he remains one of the funniest scientific philosophers of all time. And yet, he, and his great works remain underground for the most part, bubbling away beneath the surface, patiently awaiting rediscovery and reenactment by brave new readers from next generations and with fresh interpretations. I hope this recording can introduce his ideas to at least one such reader. We need to act on his wisdom now!

After an auspicious solar eclipse experience in August, and a house fire in December moments before the millennium fever of 1999 went into overdrive, i had a rare moment of clarity, and decided to sell my prized turntables and scrape the money together for a ticket to go and see this guy for myself. Only six days after the sad passing of Terence Mckenna, i set off to New York where i next caught the Greyhound bus to New mexico, and my destination, the so called the ‘Prophets Conference’ only two days before my 24th birthday.

Little did i know that RAW had fallen ill that week due in part to his post polio syndrome, together with the grief of losing his lifelong companion, writer and activist Arlen Riley Wilson. The announcer at the conference informed the crowd Bob would not make it, and i went into an altered state of total shock awareness.    After the conference was over i straddled that Greyhound up to San Francisco and fell in awe of the San Francisco bay area. I hung out at Wired Magazine radio station, worked for Sound Photo Synthesis, jammed on turntables with jam jazz super group Garaj Mahal. Plus i met Dr John Lilly, Jack Sarfatti, Saul Paul Sirag, and some other friends and associates of RAW, all seemingly by happy coincidence most of them were presenting at the Guilding The Lilly event at 3220 Sacremento street.

When my visa time limit came up, unlike Columbus, I returned to the UK. One memorable summer day in 2000 i received an email from the Prophets Conference asking if i would like to be a carer for Bob during his next lecture in Palm Springs, 16-18th December 2000. I eagerly responded ‘yes’ and started to save up my dole money.

Bob’s fine lecture at Palm Springs can be viewed on youtube and you can hear him say at one point “I had a Manhattan with my lunch” which i purchased for him when sat together with Paul Krassner and his wife Nancy before his show. This may have led to him using slightly more taboo words than usual, which became part of the reason why the conference wrote him a letter explaining that they had received complaints about his language! and were unwilling to invite him to any more conferences, unless he more or less cleaned up his act. For fucks sake.   Bob writes about this in his book T.S.O.G: The Thing That Ate The Constitution. I was sacked from the Prophets Conference a few months before Bob. My crime was much less punk rock, i failed to get Bob to the stage with adequate time to spare before he was scheduled to speak, which set a few people panicking and resulted in the boss lady of the conference screaming at me in front of Bob.

After his lecture, Bob gestured me over and invited me up to his room to conduct an interview, which i hinted at earlier. This was partly due, i think, to the fact that he saw how badly i was disgraced earlier and so took a little pity on me. I gifted Bob with a copy of the “The Stargate Conspiracy”, a pretty lame book in retrospect, but a text i figured he should take a look at as he had a few mentions in it, along with almost everybody else at the fringes of paranormal and psychic research in the 1970s.

I offered Bob some dried mushrooms picked at my local spot called Wychbury Hill. He gracefully passed on them with a kind smile and nod. They didn’t go to waste though, years later while reading an article by Richard Metzger (Dangerous Minds) who visited Bob’s room shortly after my interview–i discovered Richard ate the shrooms’ and reported that they were good and strong. Success. His friend Alex Burns, also from Disinformation, managed to get us all super high with some High Times Cannabis Cup winning weed, named William’s Wonder.

CAPITOLA
I pressed the button for the apartment number Bob had sent and waited, and waited…and after what seemed like an eternity i heard the crackle of the intercom and a familiar voice “yes”.

“It’s fly agaric, erm’, i was in touch with you by email about coming down to visit”. After another long pause he said “So…do you wanna’ come in then?” “Yeah, sure” i said, and he buzzed open the steel gate. I walked around the small inner garden area, up some steps to the front door which was already ajar. I stepped through the door.

Once through I slipped my shoes off and walked past his study on the right, and his small library area to the left. He was sitting on a couch, next to some large sliding doors, with a fresh clear view looking out over the Monterey bay. “Hi Bob, thanks for having me over.”

“Would you be so kind as to grab me a coffee, it’s in the pot” he said. “Sure”. I fetched a mug, which had a quote from Hannibal Lecter printed on it, filled it with black coffee and set it down on the table, sitting opposite Bob. “Thanks, fly. So, you’re going to make a recording right?” he asked. “yeah, if that’s cool with you.” I unpacked my minidisc recorder, and set up the microphone on the table.

The apartment reflected a humble man, with moderate furnishings, a couch, two chairs, a television set, stereo, coffee table and a dresser decorated in what looked to me like traditional Japanese artefacts. There were framed pictures hanging up and ornaments that indicated this really was Bob’s residence. On my way out I recall seeing a certificate from a UFO convention, plus I’ll never forget the cute Loch Ness monster ornament laying out on top of the cable box, which at one point during the interview he politely asked me to straighten out for him.

We had two smoke breaks out on the balcony, where i kissed the sky with a specially rolled up bomber. Bob passed my offer due to already feeling high as a mountain goat on his marijuana brownies, which he consumed for medical purposes to help relieve the pain from post polio syndrome. It would be fair to say we were both pretty high and cheerful. I went the whole nine yards and cracked open a four pack of guinness, which was probably a mistake due to the slight fogging of my memory caused by the alcohol.

Bob talked and talked, weaving his unique prose to my unrehearsed questions, turning them into delightful examples of his unique mind at play. He mixed hilarious tales with some serious facts and produced his unmistakable discordian dance of delicate metaphors. There were times when my mouth opened and nothing came out, due to my processing what he had previously said. I had to remain mindful not to interrupt or talk over him, which i’m prone to do at times. There seems nothing worse to me than an interviewer who can’t listen, and sings the eternal song of “I”.

The audio interview is regrettably only the first half of the full recording, the other half of which remains lost in an ocean of badly indexed minidiscs. Fortunately, i made a transcription of the full recording, which was published at the Maybe Logic Quarterly magazine in 2008. However during the interview my disc space ran out, but we carried on talking for at least another 45 minutes. Hence my regret at getting half drunk. Some of the subject matter i recall from that chat included Saul Paul Sirag, Jack Sarfatti, Paul Krassner, David Bohm and the Physics Consciousness Research Institute. He commented at length on 9/11 describing a friends experiences in New York, and the high weirdness that day, and the days that followed. I talked about some of my musical projects, about Garaj Mahal, graffiti art, Ninjatune and my fascination with jazz and synchronicities connected to the music John Coltrane.

I was made to feel welcome during the 3-4 hour visit, and Bob did not whinge or complain once. I only felt him get slightly agitated during the interview after i blindly asked him a series of four readymade questions from somebody else, the last of which was “how do you plan to take physical action?” which, when i said it, sounded rather inappropriate for a man suffering from post polio syndrome most his life, and who uses a wheelchair to get around. It hit a small nerve, he coughed and raised his voice a little “I don’t mean to ball you out but, it’s just that i hear that kind of question a lot.” He went on to describe how he attends protests and gatherings when he can get a ride there, and contributes to Amnesty International.

In 2015 I was digging for a minidisc of DJ Fly material for use on my Fly By Night radio shows, produced for Radio Free Amsterdam. While sifting through the discs I noticed one with writing in light pencil that read: R.A.W 10th September 2002. I popped it into the player, and to my delight it was the first half of the interview. I edited and boosted the sound files to the best of my ability, and added a selection of music from friends and past collaborators, resulting in what you hear right here.

I uploaded two short excerpts from the interview to my Soundcloud account and was planning to release the other parts when a friend, Mark Sampson of Iron Man Records, stepped up. In March 2016 Mark kindly offered to master the audio and release it on his independent record label Iron Man Records. So the circle is complete and I hope you enjoy the words and music. Long live the optimists.

Bandcamp Daily  your guide to the world of Bandcamp

Featuring appearances from Kari Faux, Bluestaeb and and interview with NY-bred artist Wiki